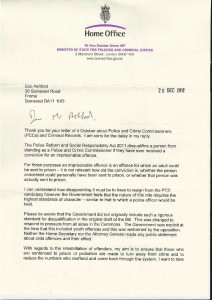 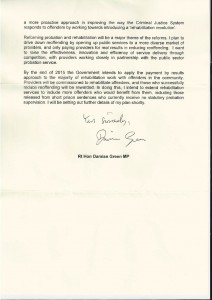 The letter above is from the Minister of State for Policing and Criminal Justice, Damian Green. It is in response to the letter I sent to him on 4th October last year, following my resignation as the PCC for Avon and Somerset. I didn’t even receive an acknowledgement of the letter or any other communication until the Guardian featured the campaign in a full page spread on the 4th December. A short email then arrived from the Home Office on 6th December stating:

“A ministerial response is due shortly to your letter. Many apologies for the delay in replying.”

The response has therefore taken almost 3 months to arrive and quite frankly doesn’t answer the points in my letter. I asked the Minister two questions:

What action your government intends to take to :

• Reforming the legislation relating to the bar on PCCs and criminal convictions and;

• Taking a wider and proactive approach to the rehabilitation of ex-offenders.

On the first question the answer appears to be nothing. And this is despite the universal condemnation of the barring legislation, which conflates “seriousness” with “imprisonable offences”, and which led me and other well-qualified people to resign as PCC candidates for minor offences committed many years ago.

On the second question the response is wholly tied up with “Payment by Results”, a policy being rolled out nationally despite research on pilot schemes not yet being available. The response completely misses the many other available options which have been well tried and tested in the past and really could bring about a “rehabilitation revolution”.

The sentence I have most issue with is:

The implication is crystal clear. Despite a lifetime career in social care and criminal justice and being successfully vetted by the Home Office to work on security sensitive issues, my character is flawed and forever defined by two offences I committed when I was 13 years old, 46 years ago. The statement is also incorrect, for many serving police officers at every level have been convicted of imprisonable offences. In advertising recent Police and Complaints Commissioners, who will oversee complaints against the police and PCCs, the Home Office requires a lower level of barring than that of PCCs and therefore in their own words they would allow people without “the highest standards of character “ to judge the actions of the police and Police and Crime Commissioners.

I am hugely disappointed by this response on a personal level, but also once more for the message it sends to those who have found themselves in trouble with the law, no matter how long ago and how minor their offences. It underlines the wasted opportunity to truly bring about a “rehabilitation revolution” which would be of benefit to victims of crime, local communities, and taxpayers alike by recognising that people who have offended (who make up 30% of the adult male population) have worth and should be encouraged and helped to reintegrate into society, not punished for the rest of their lives.

I will be responding to the Minister. I also sent a copy of the letter to the Home Secretary, Theresa May on 4th October : I have yet to receive a reply.