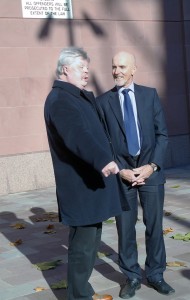 Simon Weston and Bob Ashford. Falklands war hero, Simon Weston, was unable to stand for PCC in South Wales because of a minor childhood conviction.

“An offence for which a person who has attained the age of 18 years may be sentenced to a term of imprisonment.”

This stipulation bars candidates with juvenile convictions irrespective of whether they were imprisoned for the offence.

Despite welcome proposals for change in the Legal Aid and Sentencing and Punishment of Offenders Act (LASPO), legislation alone will not change the culture of discrimination against young people and adults with criminal records. This discrimination not only does a disservice to people with criminal records, it also negatively impacts on the victims of crime and the rest of society by failing to integrate reformed offenders back into society.

We accept that for some offences and some employment the disclosure of criminal convictions is a necessity. But, at the very least, we would like to see old and minor convictions filtered out of CRB checks. The scope of the CRB should be reduced and there is a need for a real debate about the necessity and impact of current law and practice in this area.

The wider wipetheslateclean campaign seeks to influence and change existing and future legislation, working practices and entrenched attitudes relating to offending and people who have offended. The campaign does not seek to undermine existing delivery organisations, but rather, through raising the profile of the issues, it serves to signpost new initiatives and funding towards those organisations.