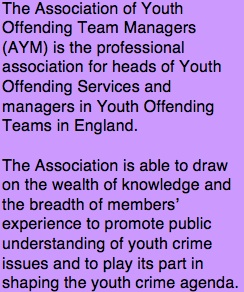 Bob Ashford said, “I am really pleased that the AYM have agreed to support this important campaign. As a previous YOT manager myself and someone involved in the youth justice for many years it wasn’t until I was forced to resign and was deluged with e mails from other people whose lives had been blighted by criminal records that I realised the full extent of the damage that can be caused by the current systems and policies. With the support of AYM and other organisations I believe we can make a real difference to what is an extremely confusing, complex and un-coordinated area of the CJS.”

Gareth Jones went on to say, “The AYM supports the principle that young people and adults who have committed offences should not be damaged throughout their lives by a criminal record. Having accepted responsibility for their actions, they should be allowed to fulfil their potential and play a full and productive part in society. It’s a social and economic tragedy that we spend billions each year on criminal justice but then prevent people who turn their lives around from working and paying taxes.”